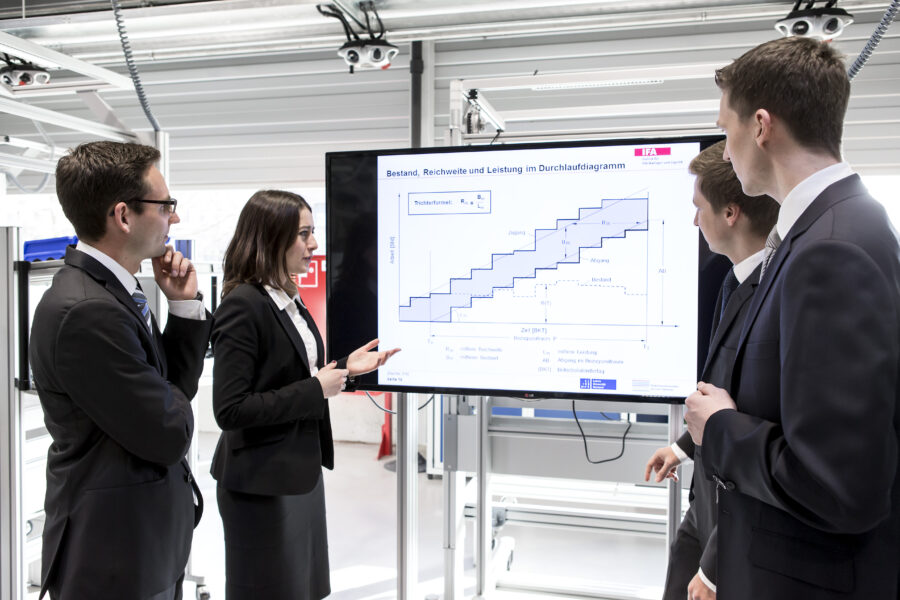 Hannover, 09 March 2020 – The digital transformation in industry is in full swing. Production planning and control (PPS) is not excluded from this. A recent survey of manufacturing companies shows that great progress can be seen, especially in automated data acquisition. However, the benefits of the data collected often remain unclear. “In order to secure our own competitiveness, existing technologies for data acquisition must be selected and implemented even more specifically with regard to company-specific data evaluation,” warns Prof. Peter Nyhuis, head of the Institute for Factory Plants and Logistics (IFA) at Leibniz Universität Hannover and member of the WGP Executive Committee. “The basic prerequisite for this is a pronounced understanding of the production-logistic interrelationships. Nyhuis therefore strongly advises to build up corresponding expertise among the employees.

The WGP Institutes IPMT from Hamburg, IFA from Hanover and WZL from Aachen, together with the Fraunhofer IGCV from Augsburg, have investigated the current developments in PPS at 95 companies in various sectors. The PPS study, which has already been published for the fourth time, shows Nearly all companies are now concerned with the digitalization of their production planning and control. For example, the progress in automated data acquisition is unmistakable. Three out of four companies now record their feedback data to the minute or even second. However, the options available for evaluating the data often remain unclear and often the benefits do not correlate with the effort required for recording. “It is therefore important to have a clear plan of what data will be useful and how this usefulness can be achieved,” explains Tammo Heuer, research associate at IFA and co-author of the study.

More than 90 percent of the study participants use an Enterprise Resource Planning (ERP) system to store process data. This is followed by production data acquisition (59 percent) and data warehouse software (32 percent) by a wide margin. However, the collected data is not used intensively enough. Less than half of those surveyed use it, for example, in production controlling to monitor inventories, throughput times and capacity utilization, while only about a third use it to update master data, which serves as an important basis for planning. Innovative topics such as digital twin or simulations accompanying operations are only weakly represented at just under 10 percent. “This shows that the data for relevant issues in PPS still has a clear potential”, Heuer states.

However, it is not so easy to tap this potential because there are obviously deficits in user-friendliness and functionality of the software and also because the employees are not sufficiently trained in handling the PPC systems. Thus six out of ten companies estimate the contribution of makeshift IT solutions such as planning tools in Excel in addition to the PPC systems very highly.

According to Nyhuis, however, the expertise on how process data can be optimally recorded and used in PPC systems and business intelligence software specifically for company-specific issues can be built up in cooperation with other industrial partners and with the WGP research institutes. The IFA, for example, offers regular training courses on the topics of “Production Planning and Control” and “Production Controlling in the Age of Industry 4.0” and also tailors training courses to individual needs. “Only through targeted further training of employees can it be ensured that the cost of data acquisition does not exceed the benefits and that companies do not become economically self-sufficient during their transformation processes,” says Nyhuis.

In addition, the institutes involved in the PPS study regularly organize an expert forum to discuss the latest PPS developments with industry and thus accelerate the transfer of knowledge.

High data quality is also a prerequisite for well-functioning production planning and control. Only if precise information about the products and the current system status is known at all times can it be evaluated in a useful way. According to the study, the data is collected using various tracking technologies. The majority of the companies surveyed use 1- or 2-dimensional coding such as QR and barcodes for this purpose; only a third rely on RFID technologies. Although, unlike optical systems, they make it possible to record several objects simultaneously, they are more expensive.

The current PPS study also makes it clear: 84 percent of companies still record data manually, at least in part – which is a source of error per se. “Therefore, one should in any case try to strive for a consistently automated production data acquisition in the long term,” advises Heuer.

The willingness to cooperate is increasing

Moreover, new technologies such as the Global Positioning System (GPS), mobile telephony (4G) or Ultra-Wide Band (UWB) are still hardly used. These technologies are used especially in large companies. Although they are currently still mainly used for data acquisition during the transport of goods across different halls or for the tracking of goods flows, they are still being used in many other areas. “However, it can be seen that large companies are pioneers in the testing of new technologies. The vast majority of the future projects are rated as successful. This is an encouraging signal to continue to take advantage of the opportunities offered by new technologies in the future,” Nyhuis sums up.

The willingness to cooperate with external companies and network with the various players in the value chain has also increased. The exchange with research institutions and universities has also increased. The study participants hope that this development will lead to greater transparency regarding the state of their own production. Behind this, however, is also the insight that self-imposed goals of PPS, such as high adherence to delivery dates or short throughput times, can be achieved more quickly.