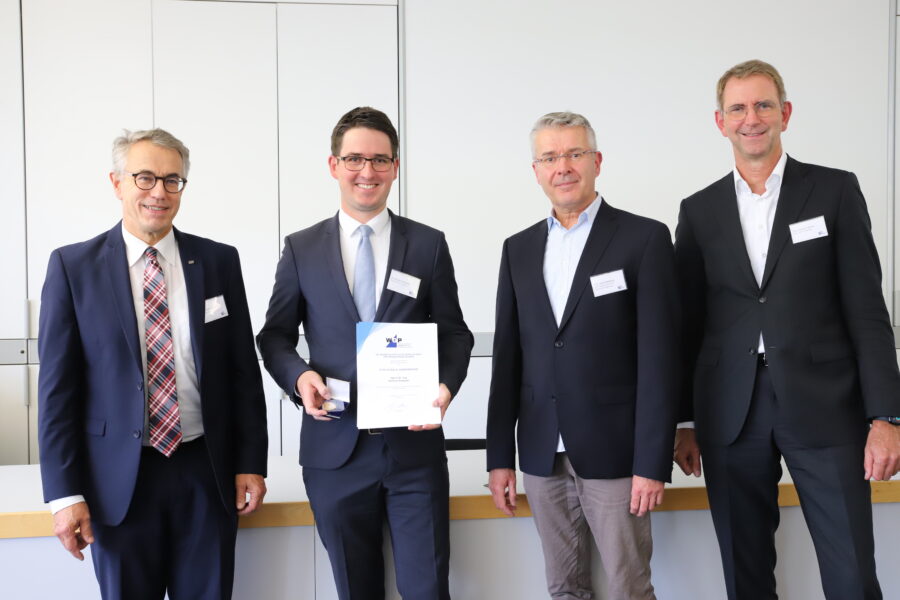 Stuttgart, October 13, 2022 – Several paradigm shifts have taken place in production in Germany in recent years. But putting them into practice is taking longer than would be desirable. “Technology transfer in Germany is still being tackled very timidly and, in my view, not comprehensively enough,” also warns Dr. Michael Riesener. For example, the young scientist is looking for and finding ways to think production and product development together. For his scientific and economic successes, he was awarded the prestigious Otto Kienzle Commemorative Medal yesterday during the annual congress of the WGP (Scientific Society for Production Engineering). “Riesener is an exceptional researcher, a forward thinker who also brings innovations to implementation,” his doctoral supervisor, Prof. Günther Schuh of the Machine Tool Laboratory (WZL) at RWTH Aachen University, explained the decision in the laudatory speech. “He has significantly advanced the paradigm shift in production, which involves thinking about product development and product use.” The Otto Kienzle Commemorative Coin is awarded once a year to young scientists who have made outstanding achievements in the field of manufacturing technology and have also distinguished themselves thanks to their personality.

Just before Christmas 2014, the phone rang – the boss. For Michael Riesener, it was a gift, because his doctoral advisor offered him the position of overall project manager at his new company, e.GO Mobile. “I had told him that I needed a new challenge so that I could stay in Aachen,” Riesener recalls. e.GO Mobile is one of the companies that the 35-year-old industrial engineer helped to establish and one of his larger projects to get production, product development and use under one roof. He was instrumental in developing the e.GO electric small car on a single platform and bringing it to market. In just three years, this resulted in a new type of passenger car, which, from a production perspective, was conceived from the outset with low investment and a digitalized micro-factory. “In production science, the realization that digital continuity from development to production to the use phase is necessary is becoming more and more prevalent. The fact that the paradigm shift toward integrating previously mostly separate areas promises success is demonstrated by e.GO’s rapid and sustainable development. The company started in a 20-square-meter office with ten people on the Aachen campus of the Machine Tool Laboratory (WZL). Today, there is a factory in Aachen with about 500 employees. “For me, such ventures in which science and business pull together show the enormous potential that can be unleashed and the dynamics that can be created,” the industrial engineer enthuses.

Automated integration from cradle to cradle

In his habilitation, Riesener goes one big step further. He is concerned with the automated integration of the areas of product development and production all the way to the use of the product: “Automation exists in more and more areas of life and modern products. It must also find its way into product development. However, we must not look at it in isolation, but holistically, from the entire life cycle of a product, from design to production to recycling (cradle to cradle). In my work, against the background of the circular economy, I try to bring the areas together iteratively with the help of digital consistency. This means, for example, that principles as well as models and methods have to be developed in order to be able to develop model-based technical systems in increasingly shorter cycles.”

But this also means that Riesener is already devoting himself here to the next paradigm shift in production: sustainability – ecological, economic and social. And not just in theory, but also in practice, for example as a member of the Scientific Advisory Board of the Center for Circular Economy (CCE) at RWTH Aachen University. This is a platform for interdisciplinary cooperation in the field of the circular economy. The aim is not only to achieve sustainable production, but also to help shape the political framework and involve society. The center was founded in early 2022. “We are currently in the process of connecting companies to the center in initial consortial projects, and this is going very well,” summarizes the award winner.

The strategic and operational implementation of research results in practice excites the young researcher. This is reflected not least in his various sideline activities, for example as managing director of the Center for Systems Engineering of RWTH Aachen Campus, WZL Aachen PS GmbH and RWTH Innovation Factory GmbH: “For me, the attraction lies in the validation of research results in the real laboratory.”

Passing on only validated results to students

And in his lectures, he only passes on validated research results that Riesener himself believes in. In addition to this authenticity, the exceptional talent lets students work in smaller groups and sometimes brings in experts from outside. He learned this from courses he taught in Singapore, where he studied for a year. The ideas imported from the Far East are well received by the Aachen audience, especially since it is easier to learn that way.

He seems to balance the many balls Riesener holds in the air almost effortlessly. That, he believes, is due to the many synergies – and his favorite and longest-standing hobby: refereeing. “I learned when I was 13 or 14 years old, whistling soccer games, how to talk to a wide variety of people in a friendly way, but also how to assert my point of view – and to do that through persuasion. You have to keep the sensitivities of different groups in mind and make a decision based on a situation once it has been assessed. And then you have to stand by it and explain it well. The fact that I learned this in my youth has a high synergetic effect on my profession.”

Synergies are not quite so obvious with regard to the family with the four children. But there again, good organization and a functioning family team, including grandparents, helps. And how do the children see it? “They would say that dad works a lot, but also plays with them a lot. Plus, he delivers what he promises.” And that includes, for example, taking them to a soccer game on the weekend – or somewhere else.