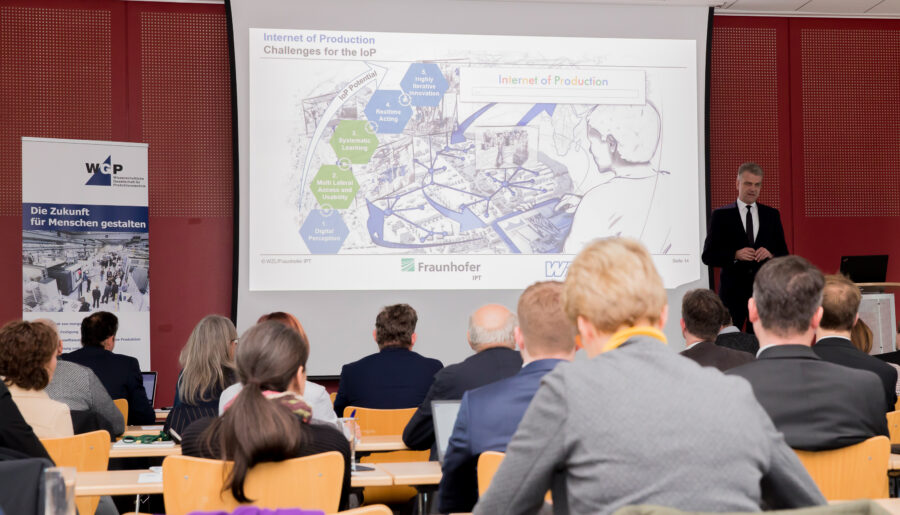 Hanover, December 16, 2019 – From January 1, 2020, Prof. Christian Brecher, Head of the Chair of Machine Tools at the Machine Tool Laboratory WZL of RWTH Aachen University, will be the new President of the WGP (Scientific Society for Production Engineering). He spoke at the International METAV Press Forum on 12 and 13 December at the WZL about the challenges of production technology and in this context also introduced the WGP. The symbolic rudder of the WGP had already been handed over to him by the acting president, Prof. Berend Denkena, head of the Institute for Manufacturing Engineering and Machine Tools (IFW) of Leibniz Universität Hannover, at the WGP Autumn Conference in Berlin in November this year.

Production technology is facing enormous upheavals. Digitization and networking have already brought about major changes in the production halls. But for the overall concept of Industry 4.0 to reach companies, the Internet of Production (IoP) must be pushed forward, i.e. the transfer of the Internet of Things (IoT) into the production world.  “This is what I want to promote during my term of office as President of the WGP,” Brecher confirmed in his speech at the press forum. “The topic of Industry 4.0 will be further developed and from our basic and application-oriented research we will develop suitable impulses for industrial practice. In this context, I am also very pleased to be able to help shape and shape the future of production in the coming years through the work of the Internet of Production Excellence Cluster, which was launched in 2019 at RWTH Aachen University”.

A new level of cooperation

Future production research for crushers must be driven forward on an interdisciplinary basis due to increasing digitalisation. “In addition to giving greater consideration to business administration – for example, in the design of new business models – we must also give more and more consideration to computer science in the production sciences. However, the endeavour goes far beyond the pure question of generic modelling and modelling – both questions of computer science”. In modern production technology, large amounts of data are available, but they are neither easily accessible, interpretable, nor modelled or networked in such a way that knowledge can be automatically generated from them. “Through my involvement in the WGP, but also in Aachen, I want to establish a new level of cross-domain collaboration with my colleagues in production engineering. Only by working together and across disciplines can we then also use artificial intelligence or methods of data-driven machine learning to generate Industrial Smart Data from large amounts of data and thus create new, intelligent solutions and added value. In the context of the current discussions, I see this as one of the decisive but still missing building blocks for the consistent success of the Industry 4.0 initiative.

According to Brecher, the German mechanical and plant engineering industry is facing major challenges, and not just since today. “Automated, collaborative or ergonomic and learning production technology for small series is still relevant in all facets. But a major task is certainly also the search for technologically mature and production-ready solutions for electromobility, whether in the field of battery production or comparable efficiency technologies such as the fuel cell. In general, he said, the country is faced with the decisive question for the future: How can we create the necessary sustainability in a responsible and economical way? “Especially through intelligent production of tomorrow, we can – and must – quickly set important impulses here,” emphasizes Brecher.

Prof. Christian Brecher, born on August 25, 1969, was a research assistant and senior engineer in the Department of Mechanical Engineering at the Machine Tool Laboratory (WZL) of RWTH Aachen University from 1995 to 2001. He received his doctorate there at the Faculty of Mechanical Engineering. After working in the machine tool industry for about three years, he was appointed university professor for machine tools at RWTH Aachen University and member of the board of directors of WZL and IPT (Fraunhofer Institute for Production Technology) in January 2004. His main areas of expertise include machine, gear and control technology. Since 2012, Prof. Brecher has also been a founding member of the Aachen Center for Integrative Lightweight Design AZL at RWTH Aachen University, together with Prof. Hopmann. From 2015 to 2017 Prof. Brecher was deputy director of the Fraunhofer Institute for Production Technology IPT. In January 2018, he took over the post of institute director. From 2020 to 2022 he will head the WGP.

Picture 3: Handing over the symbolic rudder, Prof. Berend Denkena (left), Head of the Institute of Manufacturing Engineering and Machine Tools (IFW) at Leibniz Universität Hannover and Prof. Christian Brecher, Head of the Chair of Machine Tools at the Machine Tool Laboratory WZL at RWTH Aachen University, 14 November 2019 at the Autumn Conference in Berlin, Quelle: WGP