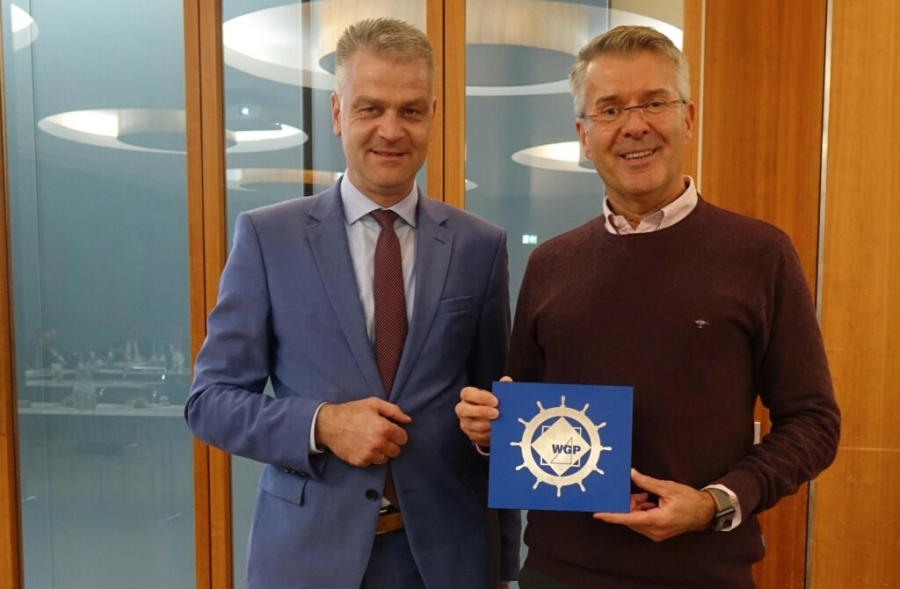 Hamburg, January 10, 2022 – Since the beginning of 2022, Prof. Jens P. Wulfsberg, Head of the Manufacturing Technology Laboratory (LaFT) at the University of the Federal Armed Forces in Hamburg, has been the new President of the WGP (Scientific Society for Production Engineering). He succeeds Prof. Christian Brecher, head of the Chair of Machine Tools WZL at RWTH Aachen University, who held the post for the previous two years. “As president, I will do my utmost to ensure that WGP’s research is geared even more strongly than before to new targets. We have a responsibility for the future. And as things stand, the predominant focus on increasing productivity and decreasing unit costs in production research is no longer enough. We need to think outside the box and increasingly include topics such as ecological, economic and social sustainability and resilience in production in our research portfolio. Last but not least, this includes influencing consumer behavior through new business models and value creation systems.”

The WGP, as an association of leading professors of production technology in Germany, has been dealing with sustainable and resilient production for several years now – topics that came to the public’s attention at the latest as a result of the discussion about the increasing consumption of resources and with the pandemic. Collapsing supply chains due to “over-globalization” and a lack of production alternatives in Europe are causing serious problems for countless companies in Germany. As researchers with visions for innovative production that can more easily overcome crises and sustainably secure Germany as an industrial location, the members have repeatedly spoken out publicly. Previous work by the WGP research institutes has been concerned, for example, with the continuous reduction of energy and material consumption, with the optimization of machines, processes and factory organization, and also with objectifying discussions on sustainable production. “However, the developments of the past years with the ever more drastically changing ecological boundary conditions and the European Green Deal force us to accelerate the evolution towards environmentally compatible and crisis-proof production. This is not only possible, but it is also a huge opportunity for our country.”

Not only quantitative, but also qualitative growth

In addition to the familiar quality requirements for machines, systems and processes with steadily increasing productivity and decreasing costs for flexible production, other target variables, a new system of value creation must be added. “There are already examples where industrial value creation is being reorganized,” Wulfsberg knows. “But as the association of leading production scientists in Germany, we have it in our hands to set the course for a revolutionary change that is environmentally and socially compatible and yet economical – even for future generations.”

Novel business models are the linchpin that will make the necessary, enormous upheavals possible in the first place. Sharing, pay per use, performance-based contracting, peer to peer and others: These are all business models that can be enabled or fueled by production technology. For example, it is conceivable that in the future household appliances will no longer be sold by the manufacturing companies, but will be handed over to customers, who will then pay per usage process. “This would result in machines being developed and manufactured that are as durable as possible, but which then have to be capable of being updated on an industrial scale and whose ‘CO2 backpack’ can be written off for as long as possible. For the users, on the other hand, it would make sense to use the machines as efficiently as possible. They would be connected to the Internet and feed data to the providing company for use and billing – a concept similar to car sharing.”

The big advantage for Germany is its broad domain knowledge. “Not only are we world champions in the export of excellent machine tools, we also have a deep understanding of production processes – an outstanding combination worldwide,” explains Wulfsberg. “That is also why we are the ones who hold the levers to future-proof production. With the help of further digitization and automation, among other things, we can create a blueprint for the sustainable factory of the future that includes machines, processes and production planning, and last but not least, people. In turn, we can make Germany and Europe the supplier for ecologically, economically and socially sustainable factories in the world of tomorrow. This is our chance to remain competitive in a new field after automotive manufacturing, for example.”

WGP recently presented the first examples of disruptive concepts with its Update Factory concept. And the FabCity initiative, in which Hamburg is involved at the initiative of Wulfsberg, is another example of an innovative system of value creation – without long supply chains, with local production on demand, environmentally and socially compatible. “We can do it, and that’s why we want it.”

Prof. Jens Peter Wulfsberg, born Nov. 02, 1959, was a research associate and department head at the Institute of Production Engineering and Cutting Machine Tools at the University of Hanover from 1986 to 1992. After working for Olympus Winter & IBE GmbH in Hamburg for about nine years, he was appointed Professor of Manufacturing Technology in the Faculty of Mechanical Engineering at the University of the Federal Armed Forces in Hamburg (Helmut Schmidt University) in January 2001. He has also been a member of the supervisory board of the Hornbach company since 1996. From 2005 to 2007, Prof. Wulfsberg was Dean of the Faculty of Mechanical Engineering. Since 2010 he was coordinator of the DFG priority program 1476 “Small Machine Tools”. From 2011 to 2013, he was appointed Vice President Research of Helmut Schmidt University. From 2019 to 2020 he was Vice Dean and subsequently from 2020 to 2021 Dean of the Faculty of Mechanical Engineering. Furthermore, Prof. Wulfsberg is a member of the German Academy of Science and Engineering – acatech, the European Society for Precision Engineering and Nanotechnology (Euspen) and the Scientific Society for Assembly, Handling, Industrial Robotics (MHI). He will chair the WGP from 2022 to 2024.