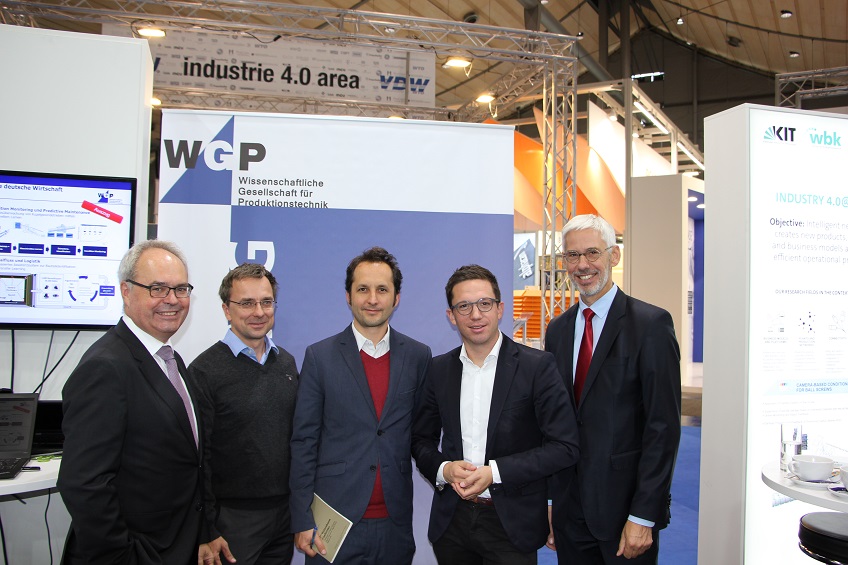 Hanover, 19 September 2019 – Representatives of the Artificial Intelligence Enquête Commission of the German parliament (Bundestag) yesterday received the new actionguideline “AI in production – developing artificial intelligence for companies” of the WGP. Last Friday, the association of leading German professors of production technology officially presented the position paper to the Federal Ministry of Economics and Energy (BMWi). The scientific society for production engineering supports enterprises beyond the action manual also practically with Germany-far introduction and potential analysis Workshops over the WGP “Produktionsakademie” and over concrete firm projects.

“Artificial intelligence is to make the German production future-proof”, describes Professor Jörg Krüger, initiator and main author of the WGP position paper. “But so far there has been no systematic approach with which the manufacturing industry could exploit this potential.” As a rule, small and medium-sized companies in particular do not have the necessary financial and personnel capacities to integrate AI technologies into their production. “As an association of leading production technology professors in Germany, the WGP has unique production knowledge,” says Krüger, who is also head of the Automation Technology business unit at the Berlin IPK Fraunhofer. “This domain knowledge gave us the opportunity, together with companies, to develop a model for a methodical approach and to facilitate the industry’s entry into AI with concrete recommendations for action. In this way, we want to play our part in keeping industry internationally competitive in this area as well.”

As part of EMO Hannover 2019, the world’s premier trade fair for metalworking from 16 to 21 September, WGP is presenting the latest research results from the fields of Industry 4.0 and Artificial Intelligence. A delegation of the KI Enquête Commission received the paper at the community stand in Hall 9 on Wednesday. “We are very pleased to be able to pass on our extensive knowledge from research and practical implementation projects to the members of parliament and experts of the commission,” emphasized Prof. Berend Denkena, President of the WGP. “We hope to draw the attention of politicians and society, as well as companies, to the great potential of AI in production and to show how products can also be manufactured economically in very small quantities in the future”.

From a political point of view, the necessary financial boundary conditions must now be created so that this AI knowledge reaches the many small and medium-sized production companies in particular and is used there to create value. “For this purpose, further education formats of the participating universities and technical colleges must be created vigorously and spread quickly,” demands Denkena. “This also applies beyond artificial intelligence or digitisation. In order to support the rapid transfer of knowledge from research into business, universities must also move away in their self-image from the initial filling of young people to training providers who promote lifelong learning intensively and regularly. The financing issues necessary for this should be clarified quickly, otherwise we will run out of time. The competence centres for digitisation promoted throughout Germany by the BMWi are very good examples of this, but we have to get away from project-related funding formats, since scientific further training must be a permanent task for the universities.”

Focus on the process, not the data

There are already many publications on AI. However, the WGP position paper stands out from these publications in one important respect: “For the first time, we are pursuing a process-driven approach rather than a data-driven one,” says Krüger. “And that makes a big difference. As a rule, companies look at the data they have collected and try to use it to gain new insights and thus new added value. On the other hand, we look at the processes that we know very well. And from this we deduce where we need to collect specific data and where AI can be used to optimize processes. This makes the integration of AI into production much more efficient. Last but not least, the new approach has a specific German competitive advantage, because it is precisely this process knowledge that sets us apart from our international competitors.”

A very frequently mentioned application example of artificial intelligence or machine learning – a sub-area of AI – is the predictive maintenance and repair of machines and systems. “This so-called predictive maintenance alone has enormous potential for savings. But it only accounts for a small part of the entire spectrum of possible applications,” says Krüger. This is demonstrated not least by 20 WGP research projects. “The examples presented in the position paper help companies to introduce a whole range of AI technologies in a targeted manner in order to make their processes, machines and plants more efficient.

Several studies have also shown that artificial intelligence has enormous value creation potential for the manufacturing industry. A study published in 2018 on behalf of the BMWi, for example, predicts additional AI-induced growth of 31.4 billion euros for this sector by 2023. With the WGP position paper “AI in production”, even small and medium-sized companies can consistently and at the same time exploit this potential for themselves in controllable steps.