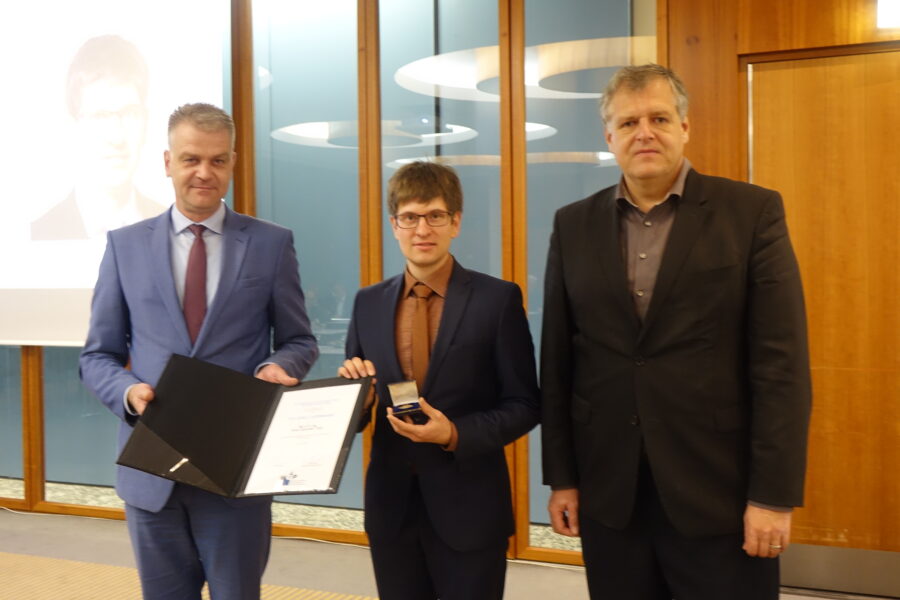 Berlin, November 09, 2021 – Profiles ranging from guard rails to drawer guides can be found in all areas of our lives. However, their production has so far been mainly mechanically supported, and digitization is still the exception in this area. This could soon change, as Dr. Tilman Traub’s research is bearing fruit: the first components of so-called roll forming lines for the production of profiles have already been digitized thanks to his work. “With his work, Tilman Traub has succeeded in making this important area of production faster and more resource-efficient. He has thus taken roll forming important steps forward,” explained Prof. Christian Bre-cher, president of the WGP (Scientific Society for Production Technology), who presented the award at the WGP autumn meeting on November 3 and 4, 2021. “His excellent research and dedication to his institute have led us to award him the Otto Kienzle Commemorative Coin, our highest honor.”

Traub, who was appointed senior engineer at the Institute of Production Technology and Forming Machines (PtU) after only 15 months at Darmstadt Technical University, specialized in the roll forming process at an early stage. “When I started, the equipment consisted of a lot of steel, a little oil and few electronics,” he smiles. That is currently changing, no doubt also driven by his research. The Würzburg native has developed a new sensor system to individually measure the accelerating or braking drive torques occurring at the different roll segments in a roll forming line. Traub has applied for a patent for the new sensor body, a so-called sensory key. However, the young talent did not want to leave it at that. He was also interested in assistance systems. It is in the development of such decision-supporting systems that current development methods reach their limits. “Typically, the design of technical systems is based on predefined requirements,” Traub explains. However, this presupposes that there is a clear idea of cause-and-effect relationships in advance, for example with regard to the sensor technology to be used. However, this prerequisite is not always met, especially in the empirical evaluation of data. Traub developed a development model, how on the one hand the sensory equipment necessary for diagnoses and on the other hand the correlations necessary for the diagnosis can be developed. To this end, he extended the classic product development of technical systems to include a conception phase with the aim of developing the requirements for later detailing. In Traub’s model, the procedure in the conception phase is characterized by an agile approach, which is more typical in software development than in classic mechanical engineering. Traub has deliberately chosen a middle ground here and brought the two worlds together. “This approach is also a novelty,” praises Prof. Peter Groche, who supervised Traub during his doctoral studies at PtU. “It is the finest privilege of my profession to be able to work with such talented and dedicated young people as Dr. Traub on the much-needed advancement of production engineering.”

Traub tested the methodology for designing assistance systems on two application cases: On the one hand, it was to provide support in troubleshooting, and on the other hand, it was to increase the energy efficiency of the production process. In the first use case, it was possible to derive a suitable design for such an assistance system under both laboratory and industrial conditions, which can detect the most common adjustment errors during roll forming. In the second use case, the 33-year-old achieved a reduction in labor requirements of up to 66 percent. Although this is only the result of an initial measured process, Traub is certain: “In any case, a reduction in energy consumption in the double-digit percentage range is possible in roll forming.”

The work of the exceptional scientist is already bearing fruit. Since 2019, he has been Head of Innovation and Business Development at Dreistern GmbH, Schopfheim. Here, he was not only able to transfer his research projects into practice and present the assistance systems at this year’s BlechExpo in Stuttgart. Traub also enjoys his new job for completely different reasons: “It would be a horror for me if every day were the same as the next.” He certainly doesn’t run that risk in his current post. Nevertheless, there is something else that drives him: “At the university, I particularly enjoyed accompanying budding engineers on their first steps into professional life and supervising their final theses. Dealing with inquisitive young people filled me with great joy, and I would like to revive that – be it with trainees or in cooperation with universities.”

Shortage of skilled workers feared for the future

Promoting young talent is also of particular interest to WGP. “The annual award of the Otto Kienzle Memorial Medal to outstanding young researchers is just one example of this,” explains Prof. Wolfram Volk, spokesman for the Science Committee and head of the Chair of Forming Technology and Foundry Engineering (utg) at the Technical University of Munich. For some years now, however, the number of students has been falling. Last year, they dropped significantly at many locations, and in some places even dramatically. If the trend of falling student and trainee numbers continues, Germany as a business location will experience an even greater shortage of qualified employees in the future. “We face the challenge of getting young people interested in technology in general and in production technology in particular in order to break this negative trend,” warns Volk. “This makes it all the more important to support committed and promising researchers in what they do.