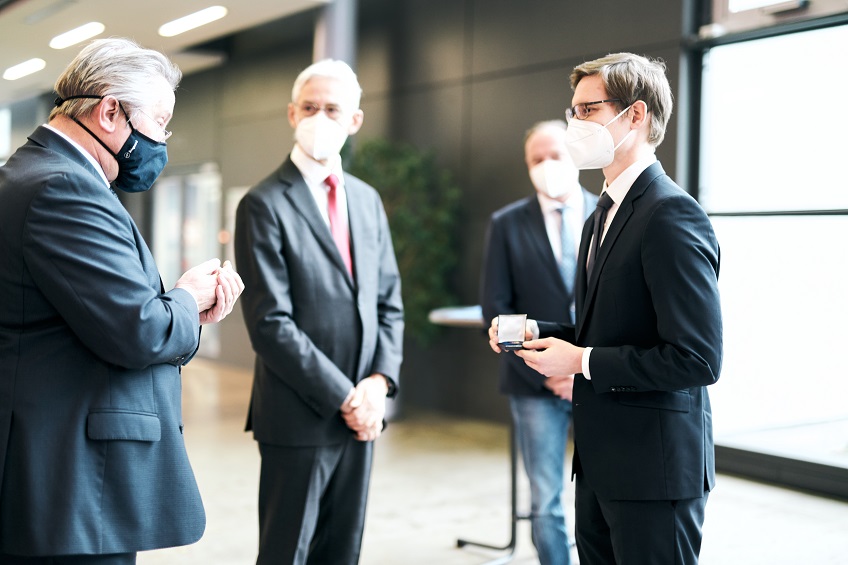 Hanover, 08 February 2021 – Dr Marc-André Dittrich accepted the golden Otto Kienzle Commemoration Medal on Friday – the prestigious award of the WGP, the Scientific Society for Production Engineering, the association of leading professors in production engineering. “His extremely quick grasp of things and, above all, his interdisciplinary view of things have brought about a whole range of innovations,” reported Prof. Berend Denkena, vice-president of the WGP and head of the Institute of Production Engineering and Machine Tools (IFW) at Leibniz University Hanover. Due to the pandemic, the award ceremony was organised on a very small scale. “Particularly in the case of self-optimising manufacturing systems, he has created an interface with computer science. In addition to fundamental aspects, his work has enabled us to take a big step forward, especially in the practical implementation of the systems.”

With a view to digitalisation, “we definitely have to align ourselves more with computer science, for example in machine learning,” adds Dr Marc-André Dittrich. “As production engineers, we still too often only look at what could be done from mechanics alone. Interdisciplinary cooperation, on the other hand, opens up new possibilities for us.”

As head of the “Production Systems” department, he is driving forward work at the interfaces of the various disciplines. Here, the staff research the optimisation of production systems and their control: “Our goal is to create self-optimising machines and systems,” explains the award winner. Since taking over the leadership during his doctorate in 2015, he has been able to increase the number of employees from ten to 25 – an astonishing expansion in such a short time. “I’m a little proud of that, but this development cannot be reduced to one person. We achieved that as a team.” Among other things, Dittrich and his colleagues have ensured the continuation of development work on a technological NC simulation for machining processes. An independent department is responsible for its constant further development.

In the Cluster of Excellence PhoenixD, Dittrich also leads a task group that deals with quality control loops in production technology: “Data from production must be intelligently linked with each other in order to arrive at self-learning systems that guarantee efficient production even with the smallest batch sizes.”

Interdisciplinarity as a guiding principle

Digitalisation, sustainability, process robustness – the topics of Dittrich’s research are unusually broad. The feature that characterises Dittrich’s entire career is interdisciplinarity. “I didn’t have any favourite subjects even at school, because everything interested me,” Dittrich looks back. “I am curious and quickly enthusiastic – with all the advantages and disadvantages that entails.” So far, it has obviously not harmed his career. The commemorative medal is the third major prize he has received – apart from the various scholarships.

With this long list of outstanding successes, the question remains where Dittrich himself sees the high points of his career so far. “First of all, my study visit to the Massachusetts Institute of Technology (MIT) in the USA. It was there that the idea of going into research matured in me.” But presenting one’s own work results in front of an international audience of experts is always exciting. “Presenting and discussing my results is always associated with a certain nervousness beforehand. But afterwards it turns into feelings of happiness.” That was probably also the case in 2019 when the new Collaborative Research Centre CRC 1368 was presented to the reviewers. “It was a great recognition, because normally it’s done by tenured professors.” And it went well, the SFB has been funded by the German Research Foundation (DFG) since 2020: “A pretty good feeling,” says Dittrich.

But the industrial engineer was finally in his element – the CRC is all about interdisciplinary research, in this case basic research on oxygen-free production processes. “This is an absolutely exciting field,” he says happily. He is in charge of a sub-project on machining. “We will investigate what exactly happens when machining is done without oxygen: What happens at the cutting edge? How does that affect the chips or the tool wear?” Among other things, the young scientist wants to focus his attention on titanium chips. Titanium is known to be expensive and non-recycled chips are extremely wasteful. “The IFW is already working on recycling methods, but the potential for reuse is also related to the degree of oxidation. We want to make titanium chips directly recyclable.”

Curiosity as a drive

But the 34-year-old also finds his work as a Research Affiliate at the International Academy for Production Technology (CIRP, Collège Internationale pour la Recherche en Productique) very special: “There I work on an international level with people who have been doing their job for a long time and are still passionate about it. That’s very stimulating,” says Dittrich.

The young scientist also seems to have an inspiring effect on students. The courses in manufacturing and its organisation, which he took over early on, are popular at any rate. In addition, Dittrich probably always has an open ear for his listeners – even if it has nothing to do with the lecture. “During my career, I have always come across people who have supported me and helped me. I want to pass that on.”

But it also takes time – besides all the other activities. How does he manage it all? “It’s curiosity and the inner drive to build something new that is not a flash in the pan,” is how the award winner puts it. And then there is also his private life. “Of course, that only works if you have someone at your side who ticks the same boxes. My wife is also active in research, which is very fortunate. We both have to work at weekends from time to time.” Whenever there is no pandemic, he can go for a walk with his wife, meet friends for a football match or play tennis with a colleague from the office across the street – or go to the jazz club in Hanover.

What’s next for his career? “First of all, I would like to complete my habilitation at the Leibniz University of Hanover,” says Dittrich. “The Production Technology Centre offers excellent opportunities for research and I am very grateful to Professor Denkena for his support. In terms of prospects, I can imagine working in industry as well as in research.”

For the time being, he has taken over the leadership of a working group in the new DFG priority programme FluSimPro. It is about the efficient use of cooling lubricants and the simulation of fluid dynamics, which is also an interface topic to other disciplines.