“Windows for robotics” and other innovations for more sustainability 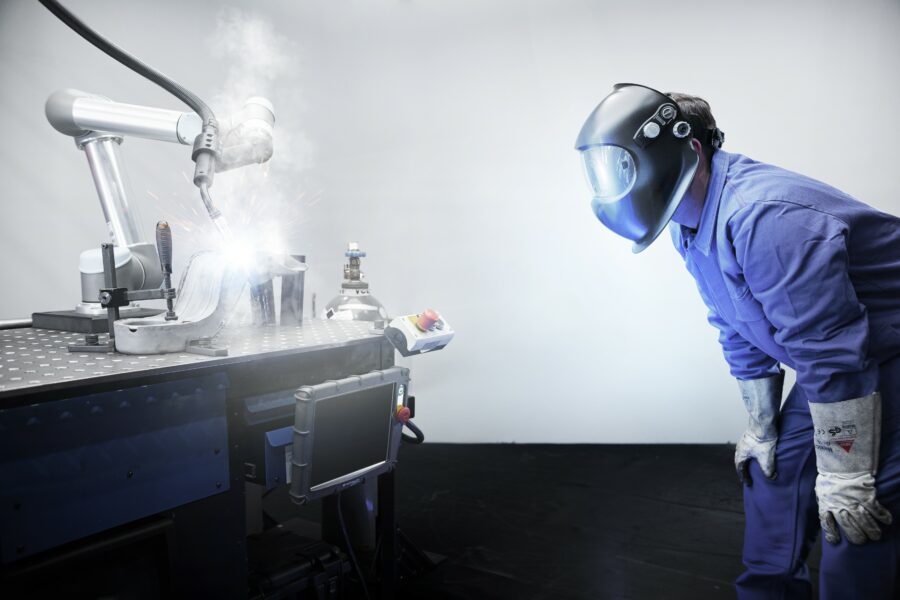 Dresden, October 04, 2021 – At the annual congress of the WGP (Scientific Society for Production Engineering), solutions for the upcoming structural change of the industry towards energetically improved processes or even the use of environmentally friendly materials were presented. “This change can only be contested with innovative production technology and the new possibilities of digitalization and automation,” warns Prof. Steffen Ihlenfeldt from the WGP Institute for Mechatronic Mechanical Engineering (IMD) at the TU Dresden and co-organizer of the congress. Christian Piechnick, CEO and co-founder of Wandelbots GmbH in Dresden, presented one of the solutions during his keynote address. “We have developed software that makes it much easier and faster to program robots,” he explained, “a user interface that allows anyone to use robotic technologies quite easily and inexpensively. That holds potential for efficient and sustainable production that is still untapped in many areas.”

Piechnick and his co-founders have developed a uniform and simple driver concept. “Think of Windows,” explained the Dresden native. “Computers were previously a complex technology, difficult for the layperson to understand, and software companies lacked easy access. Microsoft made sure that PCs could be found in every home and every business. First, it provided an easy-to-use user interface, and second, it introduced a widely used driver concept. This meant that operators no longer had to deal with heterogeneous hardware and its integration into an overall system. One of the most important contributions, however, was the introduction of uniform developer tools and interfaces. This allows millions of software developers to build and deploy solutions. This is exactly what Wandelbots is trying to establish for robotics. This includes innovative input devices as well as software.”

The democratization of robotics

A practical example: a welder can record a welding process of whatever kind using the new AI-powered software. For this, he uses the TracePen, which visually resembles a screwdriver. The process is recorded once. The software generates a virtual image of the task from the data. This can then be fine-tuned on an iPad using the Wandelbots software. The software generates a skill for any robot – and also integrates its environment, such as end effectors or sensors that it uses. At the push of a button, so to speak, it takes over the specified welding process fully automatically. “This is the democratization of robotics, because now it is no longer just large companies that can automate large series, such as in car body construction, simply and cheaply. All of us, from robot manufacturers to system integrators and application manufacturers to end customers, can benefit.”

Small and medium-sized companies could receive a boost from the new concept that can hardly be underestimated. “So far, they have been left behind by automation. But that will change with our technology, because technology is no longer the really expensive thing about robots. Financially, it’s mainly the programmers who make an impact.” The “Windows for robots” provides everyone with a universal platform on which different manufacturers can work together to build solutions that can then be used by anyone. This creates entirely new opportunities. “So many AI experts have so many great ideas that can’t be implemented because they can’t understand and program robots,” Piechnick enthused. “That kills a whole lot of the ideas. With a platform like this, the imagination of AI specialists will be much less limited in the future.”

It’s not just the boundaries between IT and production technology that are becoming increasingly blurred. WGP professor Reimund Neugebauer, president of the Fraunhofer-Gesellschaft, spoke about the convergence of different technologies. Completely different fields of research are converging. Among other things, Neugebauer mentioned biological transformation. “We are just beginning to explore how we can use principles, materials and structures from nature for production technology,” the production scientist explained. “With the convergence of biology, computer science and engineering, sustainable and intelligent production will be possible.” As just one example, understanding ant colonies and their swarm architecture can help optimize the utilization of a production process, increasing both resilience and resource efficiency.

In principle, Ihlenfeldt was very pleased with the quality of the contributions. “The boundaries of production technologies are being pushed further and further. New ideas are emerging from the contributions and discussions on robotics, innovative cutting and forming machine tools and processes, additive manufacturing and, last but not least, business management topics. They can enable the manufacturing industry to produce innovative solutions. In this way, we are doing our part for a sustainable industry that is not only sustainable, but also continues to secure the prosperity of us all.”